Be sure to sign up for the weekly RV Travel Newsletter, published continuously every Saturday since 2001. Click here.
Huge RV parts & accessories store!
You have never seen so many RV parts and accessories in one place! And, Wow! Check out those low prices! Click to shop or browse! 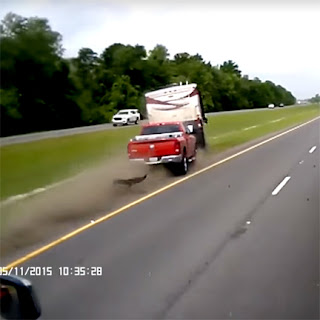 You may have seen the video shot by a trucker's dash cam in Louisiana earlier this year. In it, a motorhome passing the big truck suffers a catastrophic tire failure, runs off onto the median, and rolls over. Happily, neither the driver or passenger in the motorhome were seriously injured, and the median cable system – while not stopping the motorhome entirely, evidently slowed the rig enough to prevent what might have been a worse scenario. We're including the dash cam footage at the end of this story.

In a "double header" blog, we'd like to focus on a nine+ minute video produced by tire manufacturer Michelin that graphically demonstrates how to deal with a tire loss. While it would be great if all RVers could go to a hands-on class where they're put behind the wheel of a rig, and then a tire is deliberately blown out for teaching purposes, obviously that's not possible. Still, this video can teach you what you need to know in dealing with a "blown" tire scenario. What is that?

It's all counter-intuitive, but it really is simple: STAY OFF THE BRAKE, AND HIT THE ACCELERATOR INSTEAD. Counter-intuitive, yes. Like you, when I hear something that sounds like a gunshot, I want to duck and take cover. But doing that when a tire blows – by hitting the brakes, is most assuredly one of the best ways to really make a bad situation terrible. Hitting the brakes will cause you to lose control; slowing down immediately will likewise about guarantee that your rig will be pulled in the direction of the bad tire, while steeping on the gas and steering back into control will overcome the forces developed by the loss of air pressure. Please, WATCH THIS VIDEO, it could save your life and those of others, too.

Here's the "other" video. Interestingly, if you watch it closely you'll see that the motorhome driver here doesn't appear to hit his brakes. The only light to the rear of his rig that's visible is a momentary flash of his right turn signal – possibly he hit it while trying to fight for control. Did he just "get off the gas" and lose it? Did he accelerate? We don't know. In any tire loss scenario though, accelerating offers you the best chance of recovery.

Your comment has been received and will be posted shortly, after our moderator has determined it is not spam (we get a lot of that, sad to say).

Watch this 35-second video about the RV Travel Channel on YouTube. Learn why a free subscription to this channel is a "must" for RVers.

RV clubs in the USA and Canada

The most comprehensive directory on the Web. Updated regularly.

If you have a comment or question about this blog, write to Chuck Woodbury at Chuck@RVtravel.com.